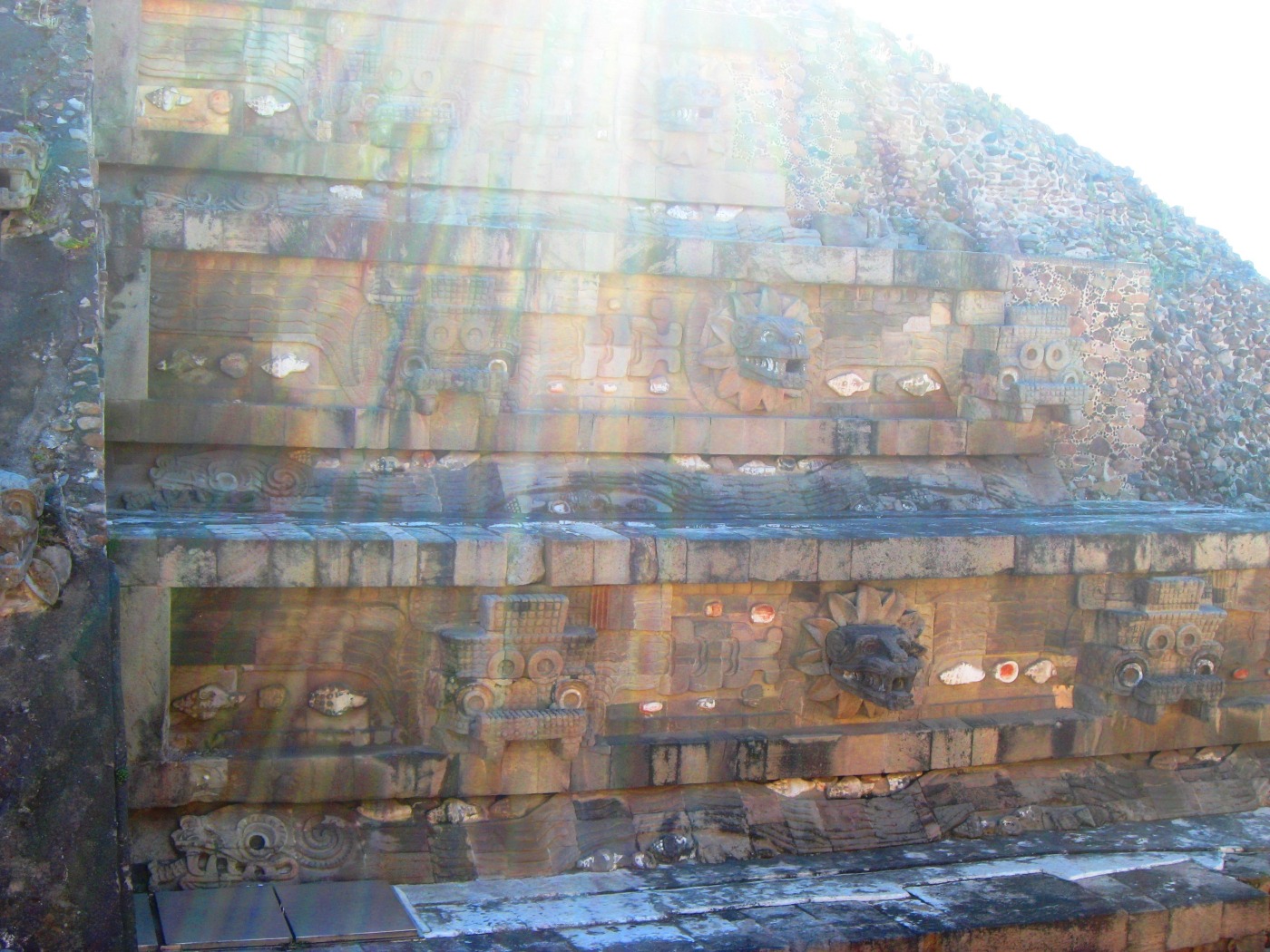 We spent four days in Mexico City last January and many of you have asked for our itinerary.   Five of us met there for several days of food, culture, and history (and a fair number of cocktails and bottles of Champagne.)  We left more undone than done, but it gave us lots of reasons to return. With only 4 days, you end up being selective about your activities, so your choices might vary.

The five of us arrived on a Thursday afternoon within a couple of hours of each other which allowed us to share a private driver with a large SUV from international arrivals  to the hotel.  Mexico City is an easy flight from US international airports and about four hours of flying time from Atlanta.  Give yourself time to go through passport control/immigration.  We checked in to the St. Regis, had a dip in the spa’s Jacuzzi (with a clear high rise view of the mountains) and dressed for cocktails before dinner.  The St. Regis caters to a lot of corporate execs, international business travelers, and Latin American elite so security is high. Our driver was known to the doormen and guards at the hotel so we scheduled him to pick us up for dinners every night of the trip.

Hotel:  St. Regis Mexico City,  Paseo de la Reforma 439, Colonia Cuauhtemoc, Mexico City, 06500, +52 55 5228 1818 —  In the heart of the financial district, the St. Regis occupies a portion of the tallest building in the city with a stunning view of the Diana Fountain from the lobby and restaurant.  Terrific outdoor bar and breakfast seating gives you a great view of the stunning modern architecture that’s a signature of the financial district.  Just two blocks from Chapultepec Park, the location of this sleek, modern hotel is perfect.  (Downside: no outdoor pool, but there is a good workout room and indoor pool in the spa area.)  Make sure you plan for time to enjoy evening cocktails and snacks on the bar’s outdoor balcony overlooking the fountain and be doubly sure you plan to enjoy the impressive breakfast every morning.  If your travel professional is a Virtuoso agent, you’ll enjoy some great perks so make sure you ask.  Pro tip: If you’re a Marriott premier points customer, make sure you link your Marriott and SPG accounts and you’ll get the same perk level for both accounts.

8:45 p.m. Dinner at Quintonil , Newton 55, Polanco, CDMX +52 55 5280 2680 — Quintonil’s Chef Jorge Vallejo specializes in Mexican classics (ant eggs, anyone?) turned into stunning fine dining dishes making it clear why the Quintonil is one of the top 50 best restaurants in the world.  We ordered the wine pairings with the tasting menu and found many of the dishes were perfect with a few of the stunning Mexican wines from west of Mexico City. I was worried that wine selection might be limited and primarily Spanish (like in the Caribbean), but we had a wide variety of Italian, French, California and S. American wines as well as beer and mescal. Quintonil is a popular stage for out-of-town chefs so we were fortunate to meet visiting chefs from New Zealand, the UK, Australia and New York City.  Course after course came out with each one topping the last in terms of intense flavors and impressive preparations. Faves:  whole roasted huitlacoche, beets roasted in ash, and a Mexican Sauvignon Blanc that paired beautifully with several courses.  Reservations are a must.  Pro tip: If you order the tasting menu and want wine pairings, ask the sommelier to bring you wines with each course. The small extra charge is worth it.

8:00 a.m.  Teotihuacan  — We were up early on Friday for a truly impressive breakfast (breakfast in Mexico remains my favorite thing) before meeting our private guide to tour this ancient pyramid complex.  About an hour outside the city, our private guide and driver were critical for giving us access to the best of the massive complex.  Booked by our travel pro, our guide had an excellent archeological background and was able to answer all of our questions on the history, culture, and symbolism.  We visited the oldest sites as well as the Pyramids of the Sun and Moon as well as the Quetzalpapalotl Palace Complex. Having a driver was nice as we could leave bags and jackets behind plus he had a cooler of bottled waters for us. Our guide climbed every step of  the pyramids with us answering questions along the way. (We noticed most other guides staying safely on the ground.)  The morning quiet was interrupted periodically by loud cracks as locals set off fireworks in preparation for a saints day. The idea that the noise will ward of evil spirits was a perfect example of old and new traditions coming together.  Pro tip:  It’s 248 steps to the top of the Pyramid of the Sun. There are hand rails to grip all the way up the steep climb but no guard rails on top.

2:00 p.m. Lunch at Fonda Fina, Medellín 79, 06700 Ciudad de México, +52 55 5208 3925  — Our tour wrapped up in time for us to make it back to the city for lunch reservations at Fonda Fina.  This authentic restaurant is backed by Quintonil star-chef Jorge Vallejo but making a name for itself with it’s fresh menus showcasing rustic dishes.  I could have eaten everything on the menu. Fonda Fina was just a few blocks and an easy walk from the hotel in the commercial district.  Don’t miss the tamarind margaritas!

8:45 p.m.  Dinner at Biko, Presidente Masaryk 407, Polanco, Mexico City 11550, Mexico | +52 55 5282 2064 — This sleek, posh restaurant is clearly a choice of many of Mexico City’s local heavy hitters and earned a spot on the 2016 World’s Best 50 Restaurants list. (We spotted a few discreet security guards next to tables in the dining room.) We enjoyed a creative but more traditional European tasting menu with wines paired to match.  The cuisine is polished, modern and sleek matching the decor. (It’s the place you’re most likely to have smoke or powder in a dish.)  Great wines and we were ready for bed after our active day full of hiking, eating and drinking.  Opentable reports this restaurant is permanently closed.

It was another beautiful day as we enjoyed a leisurely Saturday morning breakfast — lordy, the bread is so good not to mention the fruit, tamales, and the incredible juices.  (We noticed the addition of kids food for breakfast as well as candy jars in the lobby.  Family is important in Mexico and many business executives have their families visit on weekends.)  Midmorning, several of us walked the two blocks to Chapultepec Park, a massive urban park utilized by so many in this busy city.  It’s also home to the Modern Art Museum, the world-famous Anthropology Museum, the National History Museum and Zoo as well as a children’s museum, the technology museum and an amusement park. Overlooking the entire city is Chapultepec Castle (Castillo de Chapultepec), the famed home to the ill-fated Emperor Maximilian. A small entry fee gets you into the complex including the Alcazar (residential portion and gardens) and the National History Museum with murals depicting the Mexican Revolution. It’s worth the climb for the stunning views of the entire city.   One of our party ventured off to run a couple of shopping errands and was caught up in the Women’s March!

1:00 p.m. Lunch at Contramar, Durango 200, Colonia Roma, Delegación Cuauhtémoc
CP. 06700, Ciudad de México, +52 55 5514 9217 — This popular indoor/outdoor cafe is the perfect Mexico City experience.  Lingering over margaritas and raw tuna tostadas, you’re just as likely to see locals brunching with touring rock stars and Mexican celebrities. Reservations are a must and outdoor patio tables are tough to get. Still, bring an appetite and just enjoy ordering round after round of small seafood plates (and round after round of margaritas) until you’re satisfied.  In the heart of the commercial district, Contramar is an easy walk from the St. Regis and on a beautiful Saturday afternoon, everyone is out in the city!  After lunch, we found ourselves in a small park planted in chairs a local vendor was selling, listening to music, and waving at locals.

6:30 p .m. Dinner at Pujol, Tennyson 133, Polanco 11550, Mexico City +52 55 5545 4111– I truly don’t recall why our reservations were so early other than the fact that Pujol is perennially one the top 20 restaurants in the world and perpetually booked.  Early or not, it was worth it.  This Mexico City classic specializes in mole — and menus (in a wax-sealed envelope) note two dates: the date of your meal and the number of days the old mole has been going.  The number on ours was 1182.  And what a difference 1182 days makes. Early courses in the tasting menu were updated classic street food favorites, building to the mole course — an entire course featuring a plate of the dark, rich “old” mole and the light, tangy “new” mole, made fresh every day.  Pujol sports a terrific (well-priced) wine list and with recommended pairings featuring beer and mezcal.

Another day, another breakfast with lots of discussion among us about our favorite meals and the profound trip to the pyramids.  We all had early afternoon flights, and our driver was able to coordinate with us based on Sunday traffic. (Some streets are closed to car traffic in CDMX on Sundays.)  Make sure you give yourself plenty of time for connections on your way home since you’ll be an international arrival  and need to clear customs and recheck your bags.

My recommendation?  Go.  And go again.  Mexico City gave us all of the flavor of a European city minus the jet lag and 8 hour flights.  We missed the world-famous Museo Nacional de Antropologia and it’s top on the list for the next trip as well as the Museum of Modern Art, the new Contemporary Art Museum, Frida Kahlo’s Blue House, and the entire Centro Historico.   CDMX is close enough for a 3-day weekend, especially in the winter when the weather is mild.